It was great to be able to put a few questions to Dan Freeman, the writer behind the majestic sci-fi audio drama The Minister Of Chance. Dan gets to put words into the mouths of some legends including Jenny Agutter, Paul McGann, Paul Darrow, Sylvester McCoy and Julian Wadham, who have all signed up to the project on the strength of the script.

This is what he told me.

Well-known as a theatre critic for The Times, and formerly for Punch, Jeremy Kingston is also a playwright. His recent play Making Dickie Happy, about a fictitious weekend in which Dickie Mountbatten, Noel Coward and Agatha Christie stay at the same hotel, won rave reviews on its London debut.

There’s a revival of the show in March 2013, which will also be directed by Robert Gillespie.

I spoke to Jeremy about his career, focussing on Making Dickie Happy.

You can read my interview with him here.

I’ve been busier than ever with the burgeoning theatre section of EF, so much so that I’ve had to turn down a lot of stuff on the basis that I can’t be in two or more places at once, and there are only so many hours in the week.

Thankfully, we’ve recently taken another theatre critic on board to help out. This doesn’t mean that I can sit back and relax, so much as that we can cover even more events. He’s already proving a big help!

I’m busier than ever these days as a critic for Entertainment Focus, as well as working on my own reading and writing projects. Normally I’m at the theatre about twice a week, and I churn through books too. It’s a great privilege, hard work, and I love it!

Last night I witnessed Pip’s intimate knowledge of his craft first-hand, and it was fascinating to see. We were in Highbury for a gig at the Garage, and after a miscommunication meant that an arranged interview initially didn’t go according to plan; we retreated to an Italian restaurant across the road where, over two courses, Pip used his brains and charm to work out the result he was after.

It always seems like a quiet week when I’ve not been out for an evening to the theatre or to see a gig.

The highlight’s been speaking to the brilliant actor Denis Lill. It’s the second time I’ve interviewed him, and he’s completely charming and gives such considered answers to questions it makes my job so easy! I barely need to tamper with the transcript to make it scan for a readership! Looking forward to seeing him in Murder on the Nile at the Bromley Churchill Theatre the week after next.

I’ve recently been very privileged with my position as theatre critic for Entertainment Focus to see some excellent and original theatre. Love, Question Mark is currently running at the Tabard Theatre, and it’s written and directed by Robert Gillespie, who we were very privileged to chat to about his show. The Changeling is at the Southwark Playhouse and is a fast-paced Jacobean tragedy. Stunning performances in both, and great showcases of what theatre is (or should be) all about.

If you prefer, you can read them here too:

A link to my interview with the gorgeous 60s icon Anneke Wills. 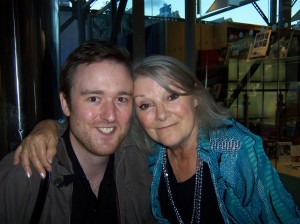